I've never met such an angry candle as Votivo Amberwood. It seems like it's going to come out of the gate fighting. I'll admit, from the cold throw, I was a little intimidated to try it. I was afraid it was going to beat me up. Maybe it was the ginger growling at me. Or the dianthus coming at me like hair raised on the back of a dog with it's spicy daggers. Luckily for me, it warmed up and mellowed as it burned. The bark on this candle is definitely bigger than it's bite. It goes from Doberman to Beethoven pretty quickly.
The warm throw is much smoother than I would have guessed, but it still has an edge to it. Like it could attack at any time but it's comfortable just hanging out for now. This candle could warm you to the core even in Alaska. It feels like a long, hot soak in a jet tub.
Dianthus comes across like a mix between cinnamon and clove creating an aggressive spicy note. The ginger gives it a real kick creating a 1-2 punch with the spices. Patchouli and sandalwood bring the the fragrance down to earth but are indistinguishable to the overwhelmingly spicy aroma. I'm surprised that this power-packed combination of scents isn't overwhelming in fragrance. It filled the room perfectly without strangling me.
I can't figure out why it's called Amberwood. There doesn't appear to be any amber or wood in it and the description doesn't reverence being lost in a cabin in Amberwood State Park. I think I'd name it Spice Market or Black Clove. I couldn't find any tea in it either, though the candle would go very nicely with a steaming hot cup of tea on a brisk day. If you need to be warmed deep into your soul, this is your candle.
Fragrance intensity: 3/5. Burn quality 4/5.
votive candles votivo amberwood 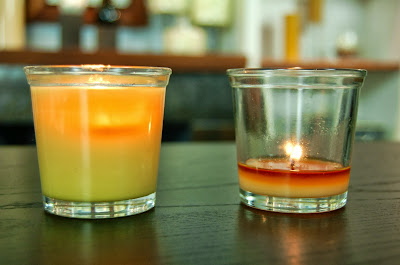 We hear this question all the time: "What are the strongest scented candles?" or "I'm looking for strong scented candles. What do you recommend?" This is, in fact, the most common request we get year round. Many brands have some fragrances that are very strong while others can be more subtle providing a nice background fragrance.  Aquiesse is a great example of this. Sandalwood Vanille surrounds me with the most intoxicating and comforting scent while Timber (now discontinued) left me wanting more of it's rich cedar scent. While it's nice to have variety in fragrance intensity, it's also nice to know when you can really rely on a brand to come through with a strong throw time after time regardless of the scent. If you're looking for highly scented candles that you can count on to come through every time, we recommend these brands: NEST Candles Regardless of the scent, you'll know when you're burning a NEST candle. Even the cl